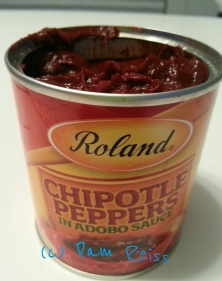 I’ve never used chipotle peppers in adobo Sauce — mainly because I’ve never been able to find a kosher version before. But a while ago I spotted this product on a supplier’s list and ordered a case thinking something like “ah! now I will use these!”. Well . . about six months later, I’ve finally tried them. — and loved them!

If you’ve never used them or had them, they are smoked peppers (often jalapeno) in a delicious sauce made of vinegar, tomato and spices.  On a recent trip to California, I became addicted to a chipotle salsa I had that finally pushed me into trying to cook with them at home.

There are all sorts of things you could do with these, but I started off with a batch of chili. Note that these peppers can be quite spicy and if you don’t love spicy food, go easy on them.  My recipe calls for 2 chipotle peppers (seeds removed), but you can go down to one — or you can even leave them out and just use the adobo sauce.  On the other hand, if you love spicy food, use more of them or forgo removing the seeds.

The chipotle peppers in adobo sauce add  rich, smoky and spicy flavors to this meaty chili.  I tasted it right away and liked it, but not as much as I liked it when I reheated it the next day.  I also like it on it’s own, but it was even better when I squeezed some lime juice into it and dusted the top with some chopped cilantro.   Serve on it’s own, with taco chips for scooping or over a baked potato or pasta.

Combine the cold water and ground beef in a pot, using your hands or a spoon to break up the ground beef as much as possible. Place over high heat and bring to a simmer.  Reduce the heat to low and simmer gently for 20 minutes, skimming off any scum that comes to the surface.  Set aside.

In a large pot or Dutch oven, heat the olive oil over medium.  Add the onion, carrots, celery, poblano pepper and salt and cook for 10 minutes, stirring frequently.  You just want to sweat the vegetables to soften them, not brown them.

Add the garlic, cumin and chili powder (I like Ancho or other single pepper chili powder) and cook, stirring, for one minute.

Add the tomatoes, black beans, chipotle peppers and adobo sauce and the ground beef and water you’ve set aside.  Bring to a simmer over medium then reduce the heat to low and simmer, covered, for one hour, stirring occasionally. Taste and check for seasoning.  Eat right away or chill or freeze for later.

Send me a note!

What I’ve been saying…